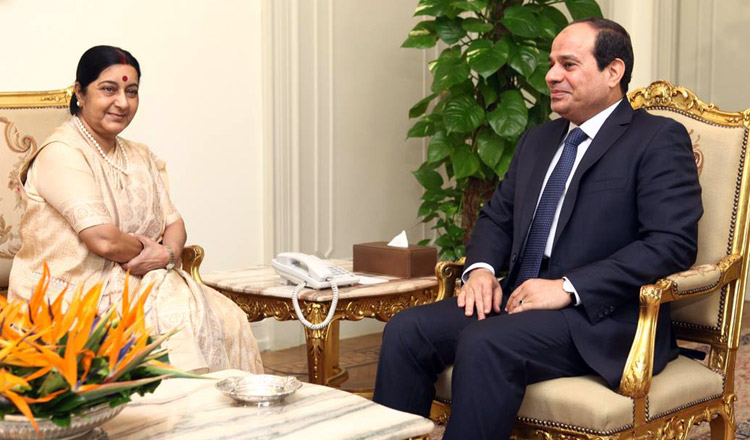 India and Egypt, two of the world’s oldest civilizations, have enjoyed a history of close contact from ancient times. Ashoka’s edicts refer to his relations with Egypt under Ptolemy II. In modern times, Rabindranath Tagore and Ahmed Shawki were close friends, Mahatma Gandhi and Saad Zaghloul shared common goals on the independence of their countries. Gamal Abdel Nasser and Jawaharlal Nehru had an exceptionally close friendship leading to a Friendship Treaty signed in 1955. The Non-Aligned Movement was a natural concomitant of this relationship. India and Egypt are working toward strengthening their partnership based on Political–Security cooperation, Economic engagement and cultural and people to people exchanges.

Smt Sushma Swaraj, External Affairs Minister of India, met with President Abdel Fattah Al-Sisi and Foreign Minister Sameh Shoukry during her visit to Cairo in August 2015 to further deepen relationship between the two old friends. The visit was significant in broadening cooperation to take our partnership to a higher level. For Egypt, it coincides with major events in the region - the opening of the 'new' Suez Canal and discovery of a large gas field in the Mediterranean. Egypt is expected to play a major role in the forthcoming IAFS-III in October 2015 in New Delhi.

Egypt has traditionally been one of India's most important trading partners in the African continent. The India-Egypt Bilateral Trade Agreement has been in operation since March 1978 and is based on the Most Favored Nation clause. Trade between India and Egypt during the last financial year (April 2014 - March 2015) has been recorded at US$4.76 billion. Most importantly, India is the sixth largest trading partner of Egypt - the second largest export destination and tenth largest import source for Egypt. India’s imports from Egypt were worth US$ 1.74 billion during FY 2014-15. It is significant to note that there has been diversification in the export basket of Egyptian products to India.

Out of the 50 Indian companies operating in Egypt with a combined investment of almost US$ 3 billion, approximately half are joint ventures and wholly owned Indian subsidiaries. The rest of the Indian companies operate in Egypt through their representative offices and execute various projects for Governmental organizations. Major Indian investments in Egypt include TCI Sanmar, Alexandria Carbon Black, Dabur India, Egypt-India Polyester Company (EIPET) and SCIB Paints. Indian companies also execute projects in railway signaling, pollution control including air pollution equipment, water treatment, irrigation, anti-collision devices etc. Indian Pharmaceutical major Hetero Drugs Ltd launched a JV in May 2015 to produce a drug used in the treatment Hepatitis C which was highly appreciated by the Egyptian government. Overall, these companies provide direct and indirect employment to approximately 35,000 Egyptians.

Technical cooperation and assistance has been a major part of the bilateral relationship. In 2014-15, 124 Egyptians have been selected to undergo various training programmes in India [out of this, 110 were under ITEC programme (Indian Technical and Economic Cooperation) and 11 under C.V. Raman Fellowship program and three under IAFS (India Africa Forum Summit program)]. In the field of scientific cooperation, ICAR and the Agricultural Research Center of the Ministry of Agriculture & Land of Egypt signed a MoU for cooperation in the field of agricultural research in March 1998. An Agreement on cooperation in science and technology was also signed in October 1995. Cooperation in agriculture and Science & Technology is implemented through biennial Executive Programmes. India is assisting in the up-gradation of a vocational training facility in Cairo, as well as in the establishment of a Centre for IT excellence in Al Azhar University.

The Pan Africa e-Network Project, one of the flagship programmes of the Indian Government to strengthen ties with Africa, has been operational through an E-learning Centre since July 2009 at Alexandria University. Till December 2014, 45 Egyptian students got MBA, 45 students got Masters IT degree, 28 students got Diploma in Business Administration and 15 students got IT diplomas from three prestigious Indian Universities. The Tele-medicine Centre under the Project also became operational in November 2009 at the Centre for Women’s Health and Development in Alexandria. The Alexandria University will soon be ready to serve as regional centre for the entire North Africa region both for e-learning and tele-medicine.

The Maulana Azad Centre for Indian Culture (MACIC) was set up in Cairo in 1992 to promote cultural cooperation between the two countries, through the implementation of the Cultural Exchange Programme (CEP). The Centre, in addition to popularizing Indian culture through Hindi, Urdu, Yoga and meditation classes, occasional dance classes, seminars, exhibitions and also organizes cultural festivals.

The third edition of the ‘India by the Nile’ (IBN) annual India cultural held in Egypt from 29 March to 17 April 2015. IBN was inaugurated by Shri Amitabh Bachchan at India House. The three-week long festival included Manipuri folk dance, crafts exhibition and symposium, wellbeing experience to highlight the importance of yoga and Ayurveda, Bollywood Musical, Indian fusion band, street food festival, retrospective of Amitabh Bachchan films, writers’ workshop and a number of other events conceived and organized on the principle of public private partnership.

Yoga has gained popularity in Egypt with 14 schools in Cairo, besides centres in other cities. The International Day of Yoga was celebrated with enthusiasm. There is also a growing interest in traditional medicines.

The strong ties between India and Egypt are evident from the affection towards India amongst the population. Three streets in Cairo are named after Indian leaders namely, Mahatma Gandhi, Pandit Nehru and Dr. Zakir Hussein. There are two busts Mahatma Gandhi – one in Cairo at the Supreme Council of Culture and the other one in Alexandria at the Bibliotheca Alexandria. 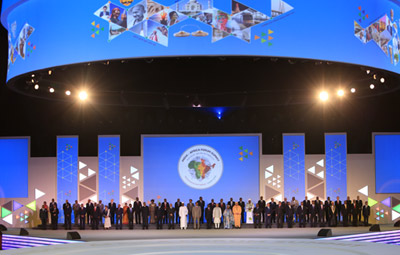 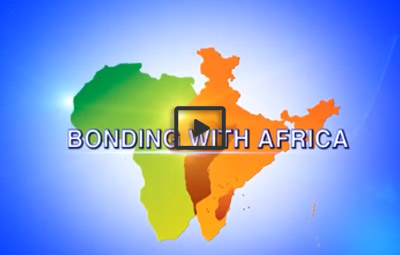